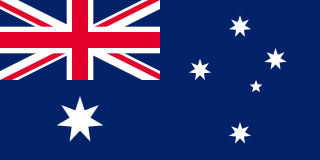 Australia, officially known as the Commonwealth of Australia, consists of the main island, Tasmania and several small islands. There are three colors in the Australian national flag – blue, red and white. The Pantone® values of the first two, as specified by the Department of the Prime Minister and Cabinet, are 280 C and 185 C. The hexadecimal, RGB and CMYK codes are in the table.

The flag is the British blue ensign with the Southern Cross in the fly and a large seven-pointed Commonwealth Star. It was adopted on 11 February 1903.