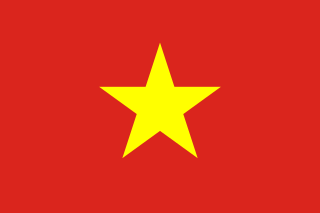 This country has 2 colors in their national flag which are Maximum Red (#DA251D) and Tangerine Yellow (#FFCD00).

The national flag of Vietnam has two colors – red and yellow – with hexadecimal codes #DA251D and #FFCD00. The corresponding RGB and CMYK values are in the table. The closest Pantone® are 485 C and 116 C.

The red comes from the color of socialism while the five pointed gold/yellow star symbolises the five important classes in Vietnamese society – intellectuals, farmers, workers, businesspeople and the people in the military.

The flag was designed sometime in 1940 and used for the first time in an uprising against the French rule in the south of the country. It was adopted as the flag of North Vietnam by Ho Chi Minh via a decree on 5 September 1945 and only much later in 1976 as the national flag of unified Vietnam.