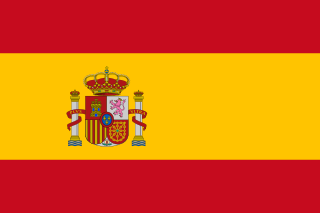 The flag of Spain has two main colors – red and yellow. Based on the Spanish Royal Decree 441/1981 of February 27, the official names of the colors are Rojo Bandera (flag red) and Amarillo-gualda Bandera (flag weld-yellow). The closest Pantone® equivalents to the hexadecimal codes are 2350 C and 7406 C for the red and yellow, respectively. The corresponding CMYK and RGB codes are in the table.

The Spanish flag was designed by Antonio Valdés y Bazán and chosen by Charles III who had received 12 different variations from the designer. The flag has three horizontal stripes – red at the top and bottom sandwiching a yellow stripe double the height of the red. The Spanish coats of arms is placed in the middle yellow stripe.