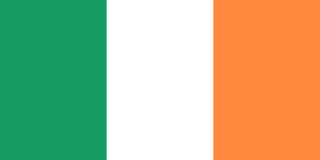 The flag of the Republic of Ireland is a tricolour consisting of three vertical stripes – green, white and orange. It’s known as bratach na hÉireann in Irish and became the national flag in 1916 when it was flown over the General Post Office in Dublin by Gearóid O’Sullivan.

The origins of the flag trace back to a group of French women who presented it to Thomas Francis Meagher in 1848. The two colors at the extremities were meant to represent the two prominent religious groups in the country – Irish Catholics and Irish Protestants – and the flag itself was to symbolise union between them; white being the traditional color of “peace”.

The Pantone@reg; numbers of the colors in the Irish flag are 347 U and 151 U for green and orange, respectively.