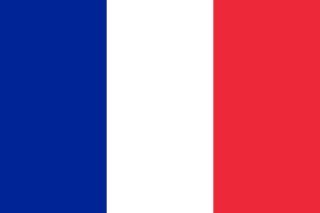 The national flag of France has three colors – blue, white and red. They are placed in three equal-sized vertical stripes. The hexadecimal color values are #001489, #FFFFFF and #EF3340 (based on the PMS codes) and the corresponding RGB and CMYK are given in the table. The Pantone® codes are Reflex blue and Red 032. Also, there is a variant of the French flag in which the blue is darker. Both flags are used almost equally.

The national French flag was adopted in June of 1976. However, from 1790 to 1794, the Kingdom of France adopted a slightly different variation of the flag with the blue being a tad darker and the tricolours reversed. The present day French flag has been in use since the 1830 revolution.