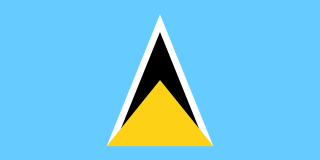 The national flag of Saint Lucia has four colors – cerulean blue, yellow, white and black – with hexadecimal codes #66CCFF, #FCD116, #FFFFFF and #000000. The closest Pantone® values of the first two are Blue 0821 C and 115 C. The equivalent RGB and CMYK codes are in the table.

The blue in the flag’s color palette symbolises the sky and the sea and especially the Atlantic Ocean and Caribbean sea. The white and black are for harmony between the white and darker races while the yellow is for prosperity. The flag design incorporates the national symbol of Saint Lucia – the volcanoes of Gros Piton and Petit Peton.