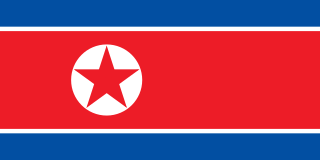 The flag of the Democratic People’s Republic of Korea has blue stripes at the top and bottom that sandwich a broader middle red stripe which itself is bordered by thin white stripes. The large red stripe has a five-pointed red star in a white circle near to the hoist.
The closest Pantone® values of the blue and red are 2145 C and 1788 C, respectively.