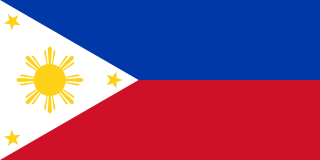 The national flag of the Philippines has four colors – yellow, blue, crimson red and white. The hexadecimal, RGB and CMYK codes of these colors are in the table. Based on the hexadecimal codes, the closest Pantone® values of the yellow, blue and red are 115 C, 293 C and 186 C, respectively. However, some have recommended using 122 C, 286 C and 193 C values.

The Filipino flag is unique in a way. It can be turned upside down (so that the red stripe is on top) to to indicate a state of war. This is the known as the War Flag of the Philippines.