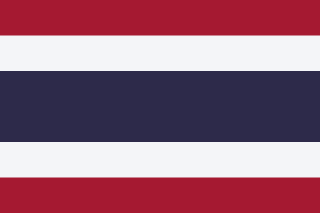 The Thailand national flag has three colors – red, white and blue. The hexadecimal codes are #A51931, #F4F5F8 and #2D2A4A and the corresponding RGB and CMYK values are given in the table. The closest Pantone® values are 187 C and 2768 CP for the red and blue, respectively. On 30 September 2017, the 100th anniversary of the national flag, the colors were standardised by the Office of the Prime Minister using the CIELAB colour space.

Known as thong trai rong in Thai, the colors in the national flag reflect the unofficial motto of the country – nation-religion-king. Thus, red stands for the people and the land, white is for the religions and blue is for the monarchy. Blue was also the color of Rama VI, the king who had specified the flag design via a royal decree on 28 September 1917.