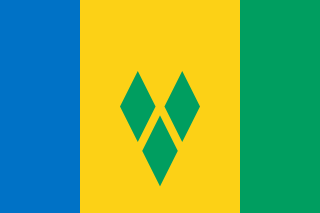 The blue in the flag represents the sky and clear waters of the Caribbean, gold/yellow is for the sand of its beaches and green is for the fertile land. The vertical tricolour, in which the middle yellow band is twice the size of the other two, also incorporates three green diamond shapes arranged to form the letter “V” as a tribute to Saint Vincent. The flag was adopted on 21 October 1985.