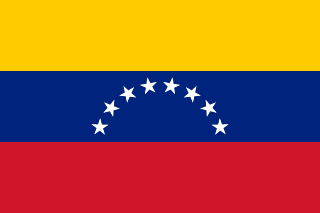 The national flag of Venezuela is a tricolour with three horizontal equal-sized stripes of (from top to bottom) yellow, blue and red. The middle stripe has eight white 5-pointed stars in a semicircle. The Venezuelan coat of arms is placed at the top-left of the flag.

Yellow represents the riches of the country, and in some interpretations, the Sun. Venezuelan flag blue is for the Caribbean sea and red is for the blood shed during the battle of independence. The eight white stars indicate eight provinces of the country; there were only 7 in the original flag and the eighth was added in 2006 by President Hugo Chávez based on a decree by Simón Bolívar.

The hexadecimal, RGB and CMYK codes are in the table and the closest Pantone® values of the yellow, blue and red in the palette are 116 C, 2147 C and 186 C, respectively.