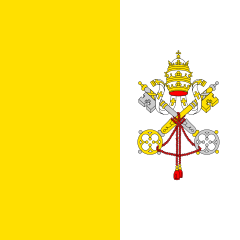 The flag of Vatican City, also known as the flag of the Holy See, was adopted on 7th June 1929. The flag has two vertical equal-sized stripes of yellow (gold) and white. The white area has two keys of Saint Peter and the Papal Tiara. The flag is square; Vatican City is one of two sovereign states to have a square flag, the other being Switzerland.