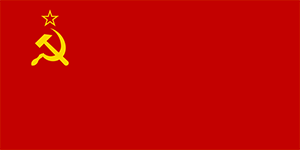 The flag of the Union of Soviet Socialist Republics (USSR) was used since 1923 to 1991. It was derived from the flag of the Russian Revolution and soon came to symbolise communism. The flag has a hammer and a sickle with a star on a red background.
The USSR flag is also also known as The Hammer and Sickle and the Red Banner.