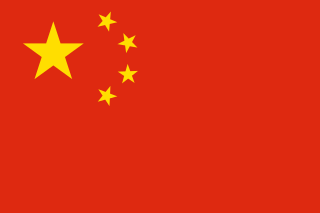 This country has 2 colors in their national flag which are Maximum Red (#DE2910) and Golden Yellow (#FFDE00).

Colors in flag of China (Peoples Republic of China) are red and gold and have been specified in an official government document. The best hexadecimal fit are #DE2910 and #FFDE00 for the red and gold. The closest Pantone® (PMS) values are 485 C and Yellow C. The RGB and CMYK equivalents are given in the table.

The flag features five 5-pointed golden stars on a Chinese red field. All the stars are placed at the top-left corner of the flag with four of them being of equal size and much smaller than the fifth star. The People’s Republic of China (PRC) flag was adopted on September 27, 1949 and hoisted for the first time at Tiananmen Square four days later.