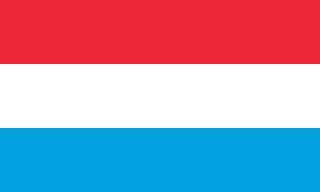 The national flag of Luxembourg has three colors – red, white and blue. These colors are derived from the colors in the coat of arms of the House of Luxembourg.

On 27th July 1993, the Réglement Grand-Ducal defined the colors red and blue with Pantone® codes as Red 032 C and 299 C, respectively. The hexadecimal values are #F6343F and #00A2E1 and their corresponding RGB and CMYK codes are in the table.

Informally called rout, wäiß, blo in the country and adopted in 1993, the Luxembourg tricolour is almost identical to the flag of The Netherlands though the red and blue are a shade lighter in the former. This lead to MP Michael Wolter initiating a debate on 5 October 2006 to have the country’s flag changed.