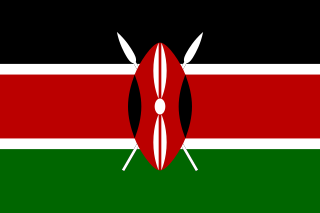 The flag of Kenya has four colors – black red, green and white. Called Bendera ya Kenya in Swahili, the tricolour includes a centrally placed Maasai shield with two crossed spears. The colors in the flag represent different things: black for the people of the country, red for the blood shed in the fight for independence, green for the Kenyan landscape and white for peace.

The colors have been specified by the country’s national archives using the British Standard Colours – Post office red BS2660-0006 and Paris / Vir. Green BS2660-0010 for the red and green, respectively. The equivalent hexadecimal codes are #922529 and #008C51 and their corresponding RGB and CMYK values are in the table. The closest Pantone® are 7622 C and 7725 C.

The Kenyan national flag is based on the flag of Kenya African National Union and adopted on December 12, 1963.