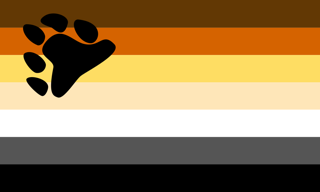 This color combination was created by user Navya. The Hex, RGB and CMYK codes are in the table below.

In 1995, Craig Byrnes came up with the idea of a Bears flag. With the help of Paul Witzkoske, the two asked people at a party to vote for the flag variants on display. The one with seven horizontal stripes and a bear paw (in the canton) was chosen as the winner and became the International Bear Brotherhood Flag. It is now copyrighted.

Note #1: The International Bear Brotherhood is also known as the gay flag or gay men’s flag.

Note #2: As pointed out by Benedetto in the comments (thank you), the flag also has a white stripe which lies between the tan and gray colors. The middle white stripe has been removed from our color scheme.