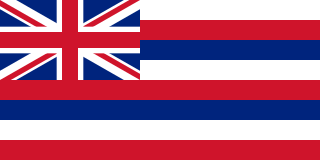 Hawaii is the only state of the U.S. to have the Union Jack, which is placed at the top-left. Additionally, the flag has 8 horizontal stripes (white, blue and red) that represent the eight islands of Hawaii.

An earlier version of the flag was adopted by King Kamehameha I in 1775 and this was a couple centuries before Hawaii officially became a state in the United States.