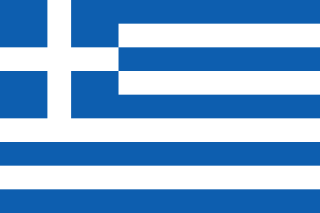 This country has 2 colors in their national flag which are Green-Blue (#0D5EAF) and White (#FFFFFF).

The Greek flag has two colors – sky blue and white. There are five blue horizontal stripes on the flag with a white cross on a blue background placed at the top-left section. The cross symbolises Eastern Orthodox Christianity.
The Greek flag was adopted on the 13 January 1822 and is known as The Azure and White.