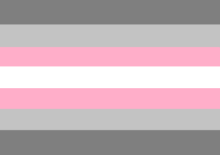 Demigirl is a gender identity used for people who identify partially as a girl, woman or feminine. A demigirl is also known as demiwoman, demilady or demifemale person.

The closest Pantone® values of the gray and pink colors are 416 C, 428 C and 1767 C. The hex code and equivalent RGB are in the table. Also note, that the CMYK values have been calculated from the hexadecimal code and are only approximates.